“I initially found a product on an internet search and it was advertised as PPD free. I understood that people who have a prior allergy to PPD must also be aware that they may react to other ingredients. I carried out the test on my arm with a tiny dab on a cotton wool.

“As instructed I carried out the test on my arm with a tiny dab on a cotton wool bud and within a couple of hours my arm started to itch.  By the following day I could not even wear a cardigan as the material was antagonizing it immensely.  My arm was itchy and burning.  I have attached some pictures of my arm throughout the week, today being the most recent photo at the end of the attached line.

“Unfortunately I am going grey and would like to colour my hair but any permanent hair dye is definitely not an option.

“I was aware I am allergic to PPD and also that PPD goes under lots of different names.  About 10 years ago I had a henna tattoo on my thigh, I did not react at all for about 3 days!! (which is longer than the 48 hours reaction most get) and all of a sudden my thigh started itching, it became very red, as the days went on the symptoms got worse.  I felt like I wanted to mutilate my body, I could watch the skin “bubble” my leg swelled from my thigh to the top of my knee and was very red.  My skin bled, scabbed over, bled more, the itching was very intense.  I went to the dermatology clinic at the local hospital and they gave me a leaflet on PPD.  Eventually my leg calmed down but my tattoo scarred for about 2 years!  Unfortunately I do not have any photos of my thigh, at the time taking photos was the last thing on my mind but with hindsight I wish I had.

“I feel so strong and passionate about getting the word out about how awful PPD is and that skin tests are “essential”.  I have 4 children and they have teenage friends, who I know colour their hair but don’t do skin tests!!  Agghh!

“At the time I was under the hospital there was an article in the newspaper about a young girl who had a henna tattoo.  That young girl is the same age as my daughter, never ever ever will I let my kids have a henna tattoo!!  When I had mine, the school offered the children the opportunity to have an Indian lady come in and paint their hands, I went into the school with the article and asked the school if they wanted to take the risk?  It never happened!  No one can be sure if the natural henna is watered down with PPD, I hate to see it offered on stands/stalls.”

The diagrams above shows the chemical structure of PPD, p-aminophenol (PAP) and PTD. PAP differs from PPD in having a hydroxyl group (arrowed) in the 4 position on the benzene ring, whereas PTD on the right differs from PPD by having a methyl group attached to the 2 position on the benzene ring (arrowed).  Several other chemical used in hair dyes have closely related chemical structures, such as resorcinol, o-aminophenol etc.  All of these are skin sensitising in predictive assays (Gerberick et al, 2005; Kern et al, 2010).  They are also known to be substances of clinical relevance in hair dye allergy (Basketter et al, 2011).

The chemistry of hair dyeing is complex, involving coupling of oxidation activated monomers in the hair shaft.

However, what is important for the development of hair colour is not necessarily of relevance for contact allergy.  What is evident though is that oxidation is key: all of the chemicals mentioned require this form of activation to produce the reactive species that can bind with skin protein and lead to the induction of the allergic state.  Early attempts to explain the type of oxidative change causing sensitisation evoked a new hypothesis, the prohapten concept, and centred on oxidation to benzoquinone: 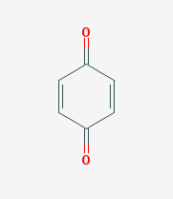 This structure represents an oxidation state for PPD, PAP and PTD, which would be highly reactive, and therefore offered a rational theory to explain the cross reactions known to occur with a range of 1,4-substituted benzenes (Dupuis and Benezra, 1982).  However, experimental evidence suggested that the situation was more complex (Basketter and Goodwin, 1989; Basketter and Lidén, 1992).  Subsequent investigations centred on a PPD trimer (White et al, 2006) or more complex and unstable oxidative intermediates (Eilstein et al, 2008). Nevertheless, what these and numerous other studies have demonstrated was that whilst the precise details of the chemistry remained elusive, these closely related substances did indeed cross react in guinea pigs and in humans (Picardo et al, 1990; Lisi and Hansel, 1998; Xie et al, 2000; Uter et al, 2002; Koopmans and Bruynzeel, 2003; Basketter and English, 2009).

Specifically pertaining to PTD, the sole alternative to PPD for the delivery of darker hair dye shades, the presence of a methyl group seems likely as a weak electron donor to tend to reduce the reactivity of PTD compared to PPD.  This would explain not only why it needs to be used at higher concentrations in hair dye products to achieve a desired shade, but also why it appear to be a little less sensitizing in predictive tests.  These effects of course cancel each other out, such that PTD seems to cause a degree of allergy in man which is similar to PPD, at least in proportion to their usage (Basketter et al, 2011).  The close similarity of their chemical structures means that there is cross reaction between the two chemicals (Basketter and English, 2009).  In this respect it is worth noting that diagnostic patch testing is not perfectly reproducible – perhaps 90% at best in typical practice conditions, although capable of being optimised to perhaps 95% by use of TRUETest (Ale and Maibach, 2004).  Thus evidence of cross reactivity which approaches this figure, as is the case for PPD/PTD, is likely to represent the most convincing evidence of complete cross reactivity that can be achieved.  Indeed the rarity of an isolated PTD positive diagnostic patch test in the absence of a concomitant PPD positive was such that it merited publication (Winhoven et al, 2007).

Perhaps it is pertinent to quote the recent words of Bregnhoj and Menné (2008): “Allergic reactions following the use of permanent hair dyes are well known and well described for both hairdressers and their clients. p-Phenylenediamine (PPD) and toluene-2,5-diamine (PTD) are the two most widely used active constituent of permanent hair dyes.  Both are extreme sensitizers.  It has been shown… that there is a significant cross/co-reactivity between PPD and PTD, as well as for many other hair dye constituents.”  PPD at 1% remains, as it has for decades, the globally used diagnostic tool by which dermatologists identify hair dye allergy.  It will serve similarly well for use in consumer sensitivity testing.